To have an effective research program you need sharp, curious, and committed graduate students. I should say my lab has one. Brandon Carpenter has been working in the Sustainable Vegetable Production Lab for a year now. He is working on the biochar project assessing its implication on carrot and pepper production. In his free time Brandon has constructed a number of cool gadgets for the lab (mechanical seed transplanter, sweet potato and tomato grader, compost bin, and now RIDS (Repurposed Inexpensive Drum-washer Sanitizer). There are many aspects of vegetable production that need to be addressed by growers who are looking to keep their customers safe. Brandon and his team of students at Iowa State University’s Horticulture Research Station in Gilbert Iowa sought to answer this question by building a drum washer to clean and sanitize produce grown at the station. The foundation of the drum washer is a platform for a composting drum. The platform consisted of a frame, two axles with pneumatic tires, and an electric motor. The frame is not the only part of this project that is finding new purpose. The drum is piece of corrugated pipe that originally served as a spool for a large role of drainage tile. 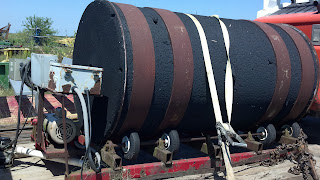 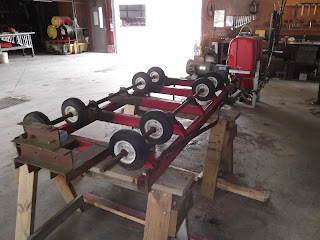 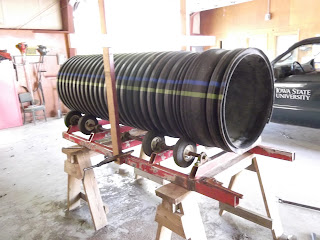 There were a few minor adjustments that needed to be made to the drum after it was made, but none of the changes were major. One of the first changes made was to add baffles in the form of PVC pipes that run the length of the drum. This was done to get the produce to role and the drum turns. Before this modification was made the produce would climb the side of the drum, as it turned, then the produce would slide back down to the middle of the drum without rolling over. Some of the heavier soils were not being removed, so strips of indoor-outdoor carpet were also added to the inside of the drum. It is thought that this is due to the weakness of the spray nozzles being used. The spray nozzles, from TeeJet, are basic cone shaped nozzles that would be used on herbicide sprayers. These nozzles were chosen because they are inexpensive and readily available.

The drum washer is now operational, although it does not yet have the ability to sanitize produce. The intention for the future of this washer is to improve the spray boom to better rinse the produce, and to have one of the two spray booms attached to a chlorine injector, so produce will be sanitized as the soil is being removed. The second spray boom will then rinse the chlorine off.