Ames, Iowa – The sustainable vegetable production lab in collaboration with researchers at Iowa State University, USDA-National Laboratory for Agriculture and Environment and USDA-SARE are teaming up to offer three cover crop workshops this Fall at following locations:

Participants attending the workshop will learn about cover crop types, planting, management, benefits, and issues associated with cover cropping in fruit and vegetable cropping systems.  Depending on weather, there will be an opportunity to assess cover crops under field conditions. Live cover crop plants will also be on display inside. 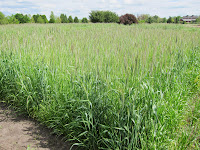 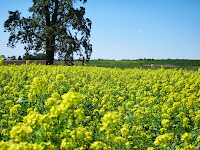 The tentative agenda for the workshop is given below:

Recently a number of growers had called in and also sent samples of their potato plants. The main symptom mentioned was the development of a mushy, black, soft lesion on the stem at the ground level (see pictures below). These symptoms are caused by bacterium called Erwinia carotovora and can take many forms (blackleg, aerial stem rot, or tuber soft rot). Bacteria either enter the seed potatoes and lower stems through wounds and injuries, or move directly from contaminated seed pieces to lower stems.

Abundant moisture at the surface of the wounded tissue is needed for infection and continued high humidity after infection favors spread of the disease in the plant. This year's wet spring weather is conducive for the spread of this disease. The decay of seed pieces in the soil by fungi and other organisms may also provide conditions for blackleg disease to develop.

The blackleg bacterium survives poorly in soil. All evidence suggests that the blackleg bacterium does not survive very well outside of association with host plant tissue. Hence, the seed tuber is the most important source of inoculum in the blackleg disease cycle. Removal of blackleg affected plants including below-ground portions is the best option. Take steps to prevent contact of diseased tissue with other plants in the field. It is unfortunate that there is no effective chemical control to manage this disease. The first and the most effective line of defense is the use pathogen-free tubers for seed. Warming of seed tubers to about 55°F before planting also helps. Seed treatment with fungicides do not directly affect these bacterial pathogens, but fungicides can reduce invasion by other fungi and therefore reduce opportunistic infection by Erwinia spp.
Posted by ajay nair at 1:49 PM No comments: