Our sweet potato harvest took place on October 17th, 2013, three weeks later than 2012. Overall the crop grew well. Slips were planted on June 7, 2013 on black plastic mulch. The mulch helps increase soil temperature and suppress weeds. Weeding was minimal, only two times, until the canopy closure. The crop was affected by Japanese beetles but the plants came out of it gradually.


We conducted two experiments this year, one identifying suitable cultivars for Iowa growing conditions and the other investigating appropriate spacing of sweet potatoes. Data will be soon analyzed and made available through ISU Research Farm Progress Reports and at http://www.extension.iastate.edu/vegetablelab/content/publications-and-reports

We seeded our cover crops during on 09-05-2013 for 2014 field study that will focus on the use of cover crops and conservation tillage practices in vegetable production systems. The plot is located at the Horticulture research Station, Ames, IA. So far cover crops are doing great. Pictures below were taken on 09-26-2013. 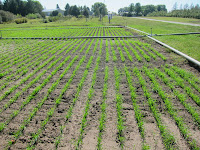 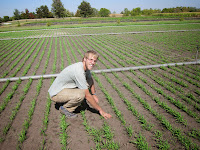 This was the second seeding of cover crops as the first seeding was not uniform. We decided to tear the plot and seed again. Both times Tye Pasture Pleaser seeder was used. The reason for the non-uniform germination of the first seeding was attributed to seeding depth. Cereal rye is sensitive to seeding depth. Although we had set the seeding depth between 1 to 1-1/4 inch, close examination of showed that the majority of seeds were at 1-3/4 to 2 inch deep. One would assume the rye to germinate and emerge at that seeding depth, but it is debatable. In our experience, the second seeding, in which rye was seeded at 3/4 to 1 inch depth, germination was excellent and the emergence was uniform (see pictures above).

Growers should monitor the seeding depth carefully as it could significantly affect emergence of cover crops. Small seeded cover crops like clovers and mustard should be handled even more carefully.
Posted by ajay nair at 8:53 AM No comments: